WWII and the John Deere Battalion

WWII and the John Deere Battalion

While most know that the John Deere brand has a long legacy of quality American manufacturing that dates back to 1837, many do not realize  the deep connection between Deere and the US Military. Check out the video and blog below for more about how John Deere dealership staff joined up to form special battalions that helped prepare tanks, jeeps and other equipment used in the D-Day invasion. Check it out!

One of those people was Neal Sullivan, and one of Neal Sullivan’s final wishes was that his photographs and scrapbooks, which meticulously document his time as a member of the John Deere Battalion during World War II, be sent to Deere & Company. Today, they are a treasured part of the company Archives.

Thirty-three-year-old Neal “Sully” Sullivan put on his military uniform for the first time November 12, 1942. An electrician at the Rolla Implement Company, a John Deere dealer in Rolla, North Dakota, Sullivan joined the 608th Ordnance Maintenance Battalion, also known as the John Deere Battalion, where he would serve out the war.

Sullivan compiled four scrapbooks after his discharge, charting his entire time of service with the Battalion. The last entry came on May 11, 1970, when he once again put his uniform on for photos. “The uniform fit just as bad or good as it ever did,” he wrote.

“Sullivan’s scrapbooks give us a glimpse into daily life with the John Deere Battalion,” said Neil Dahlstrom, manager of Archives at Deere. “He left home for the first time, missed his mom terribly, and felt a tremendous amount of pride in his service. From a generation where so many stories are lost, we are fortunate that Sully shared his story,” Dahlstrom added.

On August 15, 1942, less than a year after the United States entered World War II, Deere & Company issued a bulletin to John Deere employees and dealers and their employees. “The War Department,” it stated, “has asked us and our dealers to form a U.S. Army Battalion, made up entirely of men enlisted from our organization, for service as a maintenance unit for keeping mechanized combat equipment constantly in order at an established base.”

Col. Joseph L. Aman, commanding officer of the 303rd Ordnance Regiment, arrived in Moline in August 1942, to select officers and form the John Deere Battalion. Nearly 950 men applied, including 642 who eventually enlisted. More than two-thirds came from John Deere dealerships. Robert Tarbell of the John Deere Plow Co., in Syracuse, New York, was appointed commanding officer. Deere CEO Charles Deere Wiman, a World War I veteran, resigned his position at Deere & Company to accept a commission as colonel of the Ordnance Battalion. But at the request of the War Production Board, he instead returned to civilian status to serve as director of the farm machinery and equipment division of the War Production Board, based in Washington, D.C.

The John Deere Battalion was comprised of five companies: Headquarters, E, F, G, and H. Sullivan was assigned to Company F for the duration of his service.

In February, Company F traveled by train to California, setting camp at the Pomona Ordnance Base outside of Los Angeles.

While in camp, they trained in the Indio desert and learned how to work on a variety of equipment, including the M3A1 light tanks, M4A2 medium tanks, M6 Heavy Tanks, 105MM Howitzers, and dozens of other tanks, jeeps, and motorcycles.

After the Battle of the Bulge, Company F joined a convoy that moved through France and into Belgium.

In early November, they boarded the Queen Elizabeth, an 85,000-ton transport ship with 18,000 soldiers aboard, sailing from New York Harbor to Scotland, then to Warminster, England, their base for the next year-and-a-half.

Company F resided in a four-story building that once housed a brewery, and they reported daily to a network of shops where they overhauled equipment.

Their initial work supported Operation Overlord, which came to be known as D-Day, the Allied invasion of France, on June 6, 1944. After the Battle of the Bulge, Company F joined a convoy that moved through France and into Belgium.

On June 9, 1945, Sullivan was awarded the Bronze Star from the Army for having “ingeniously conceived, developed, and supervised the construction of convenient, practical, and time-saving testing and cleaning fixtures which were not otherwise procurable.” His “ingenuity, technical skill, and determination were an inspiration to all who came in contact with him,” according to the Bronze Star citation.

VE Day, or Victory in Europe Day, finally arrived in May 1945. Sullivan and the rest of Company F left Le Havre, France, in October 1945, aboard the ship Sedalia Victory. Ten days later, on November 6, they arrived in Boston Harbor and traveled to Camp McCoy, Wisconsin, for discharge. Other John Deere Battalion members arrived in New York on New Year’s Day. Immediately on his arrival, Sullivan sent a telegram to his mother. In his scrapbook, he posted photos of her, presumably taken outside of her home. 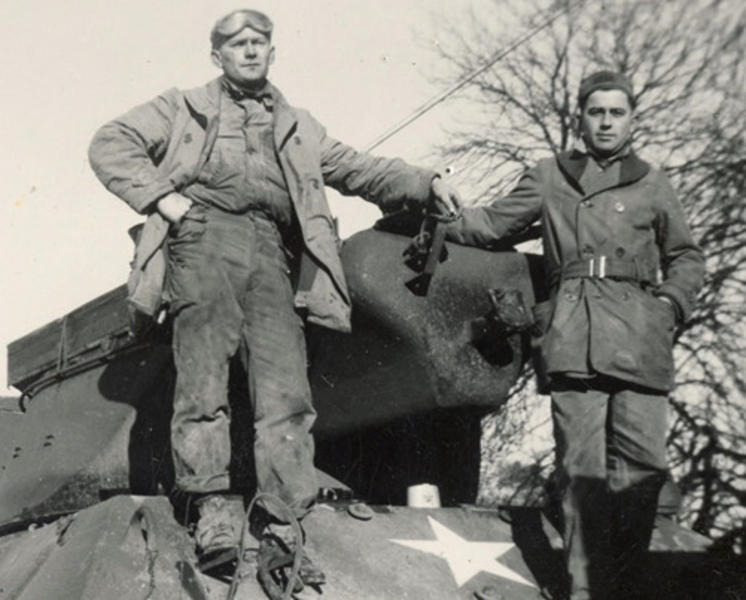 “Mother.” She was a good soldier to[o]. She had to worry, do all she could, and see out the war as much as I did. Thanks, Mom.”

Neal Sullivan returned home to North Dakota on November 14, 1945. By his count, he had spent three years, one month, and twenty-five days in the Army. Two years and three days were spent in Europe.

In 1955 Sullivan traveled to Moline, Illinois, for the first reunion of the John Deere Battalion, a reunion that occurred regularly until 2000.

“As I look back over the pictures I have, of this period of time 25 years later, I’ll say, that it makes me feel good to have served our country with this fine group of men, many of whom I still correspond with at Christmas Time. They are like Brothers to me. Maybe more so.”

In 2002 two members of the John Deere Battalion joined then Deere CEO & Chairman Bob Lane at the opening of an exhibit at the John Deere Commons honoring their service. Today, the Military Resource Groups at John Deere continue to partner with all branches of the U.S. Armed Forces to remember and to provide support for military personnel around the world.

For the full story and more pictures from Sullivan’s journal, continue reading here!